On 11 November 2020, the UK Government introduced the long-anticipated National Security & Investment Bill before Parliament. The new law will significantly expand the Government’s existing powers to review the national security implications of transactions and has been timed to coincide with the end of the Brexit Transition Period. The reforms follow concerns globally about foreign control of national businesses active in sensitive sectors, which have further intensified due to the COVID-19 crisis.

A degree of procedural certainty for investors that submit a notification

A UK national security filing should be easily accommodated in most pre-closing timetables. The Government will be required to complete its initial screening within 30 working days, and the majority of transactions are unlikely to raise significant national security concerns requiring the deal to be called in for a longer in-depth review (consisting of an initial review period of 30 working days, that can be further extended by the Government by an additional 45 working days and for any period beyond that with the parties’ consent).

However, the new law leaves a wide margin of discretion for deciding which transactions qualify for notification

The definitions of the 17 sectors subject to a mandatory notification (which will be finalised in separate regulations following the public consultation) are broadly drafted, leaving significant uncertainty for potential investors in the large number of UK businesses active in these areas, who may be surprised to find contemplated transactions must be notified. The lack of safe harbours or jurisdictional thresholds means the new UK regime will be over-inclusive, capturing transactions raising no plausible national security risks. Moreover, the breadth of transactions qualifying for mandatory or voluntary notification will be unprecedented, capturing acquisitions of even minority shareholdings (15%, or even lower if there is material influence) and a wide range assets (including land, tangible moveable property and anything with some commercial or economic value, such as IP, trade secrets or source codes).

Failure to notify: a long “claw back” period

The Government believes that if it is not notified of a transaction that has national security risks, then it should have the ability to step in retrospectively (including after completion) to address those risks. The Government will have six months from ‘becoming aware’ of a non-notified transaction in which to call it in for review, subject to an overall deadline of five years from the transaction. However, the five year limit will not apply to deals requiring mandatory notification – this means that there is no definitive end date by which the Government must act. The Government could, in theory, become aware of the transaction many years after closing, call it in within six months of gaining that knowledge, and impose remedies (including, as a last resort, prohibiting the deal) if it raises national security concerns.

Transactions which are in progress or contemplation in the interim period between 12 November 2020 and the start of the new regime can be called in by the Government once the Bill completes its passage through Parliament, regardless of whether they are completed before the new regime comes into effect.

In practice, and especially in the early years of the new regime, businesses will likely be cautious and a large volume of voluntary notifications is expected

Although the new powers can only be used for assessing the national security implications of transactions and not to serve a wider economic or industrial policy agenda, the lines are likely to quickly become blurred. The new law does not define ‘national security’, leaving the question of what constitutes a national security concern to the discretion of the Government. Also, the Government’s description of the 17 sensitive sectors suggests that industrial policy concerns are driving the inclusion of some of the sectors. Given the stiff penalties for failing to notify mandatory transactions and risk of completion being nullified years after the event, many investors may not be prepared to take the risk. Indeed, the Government estimates that it will receive 1000 – 1,830 notifications a year. 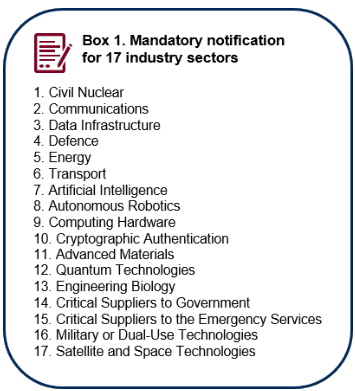 Starting in early 2021, a mandatory national security notification system will apply to acquisitions of as little as a 15% shareholding in businesses in one of 17 strategically important industry sectors (such as defence, energy, transport, communications, data infrastructure, a range of specialised technology industries as well as critical suppliers to the Government and emergency services). Outside of the 17 focus industries, notification will be voluntary.

Businesses will need to self-assess whether they must submit a mandatory filing. The Government is publicly consulting until 6 January 2021 on how the 17 in-scope industry sectors should be defined.

The mandatory regime will be suspensory, meaning that transactions cannot complete until clearance is given by the Government. If a transaction that is subject to mandatory notification completes prior to obtaining clearance, it will be legally void.

If the acquirer fails to submit a mandatory filing, it risks significant financial penalties (up to 5% of total worldwide turnover or GBP 10 million, whichever is higher) and criminal liability for directors.

The Government will have the ability to ‘call in’ both mandatory transactions (that should have been notified) and transactions meeting the voluntary criteria (but where the purchaser decided not to notify). Although the Government cannot use the call-in power before the new regime has commenced, after the Bill is enacted the Government will be able to call in deals that are in progress or in contemplation as of today, 12 November 2020. Any investor engaged in a live deal affecting the UK should therefore be acting now, to consider whether the transaction raises national security issues under the new regime and whether to proactively engage with the Government in the coming weeks.

Given the stiff penalties for failure to notify under the mandatory regime and the risk of the deal being declared void after the event, businesses will likely err on the side of caution and file voluntarily where there is a possibility that their transaction may be caught by the mandatory regime or otherwise give rise to a national security issue. Overall, investors into the UK should be prepared for additional regulatory burdens, more complex risk assessments and allocation as well as delays to anticipated deal timelines.

No jurisdictional thresholds and a wide range of transactions in scope 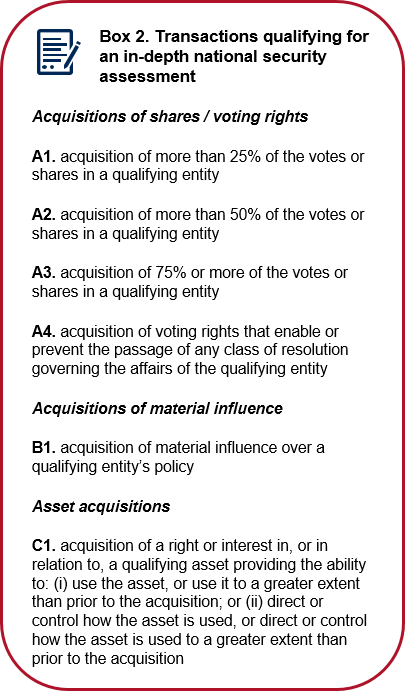