The 10th amendment to the German Act against Restraints of Competition (“ARC”) – the “ARC Digitalization Act” – has taken effect on 19 January 2021.

The amendment is a substantive overhaul of the German competition regime, especially concerning abuse of dominance and merger control rules. The German Federal Cartel Office (“FCO”) receives a new tool addressing perceived concerns regarding “digital giants” and platforms. Jurisdictional merger control thresholds are raised, eliminating filing requirements for many mid-cap transactions and reducing the workload for companies and the FCO. At the same time, the FCO can use a new tool allowing the review of certain transactions below the merger control thresholds. Finally, for the first time, companies having infringed competition law can benefit from preventive measures: Under the new law, the FCO needs to evaluate an existing compliance system and might need to reduce the fine.

The amendment shows that the German legislator recognizes the competitive importance of data. § 19 para. 1 no. 4 ARC clarifies that the refusal by a dominant company to grant access to data can be abusive, if such access is objectively necessary to operate on one of the relevant upstream or downstream markets, and the refusal to grant access restricts effective competition on that market.

Certainly, the biggest novelty is the introduction of § 19 a ARC, which addresses “undertakings with paramount significance for competition across markets”. If the FCO considers an undertaking active in the area of digital business models to have paramount significance for competition it can prohibit certain practices listed in the new § 19 a para. 2 ARC (e.g. self-preferencing measures, measures to restrict access to markets, pre-installation of own software or leveraging of market power to neighboring markets). The term “paramount significance for competition across markets” is similar to how a gatekeeper is defined in the DMA. Also, the practices which can be prohibited are, in a way, similar to the obligations being proposed in Article 5 and 6 of the DMA (for further details re the DMA see here and the DSA see here).

The 10th amendment aims at reducing the number of merger control cases for the FCO. Interestingly, just before the amendment passed the Bundestag, the domestic merger control turnover thresholds were significantly raised again, compared to the draft bill. The further increase intends to ease the burden on small and medium-sized undertakings as well as to reduce the workload of the FCO. Concentrations now need to be notified if one of the below-mentioned threshold groups is met: 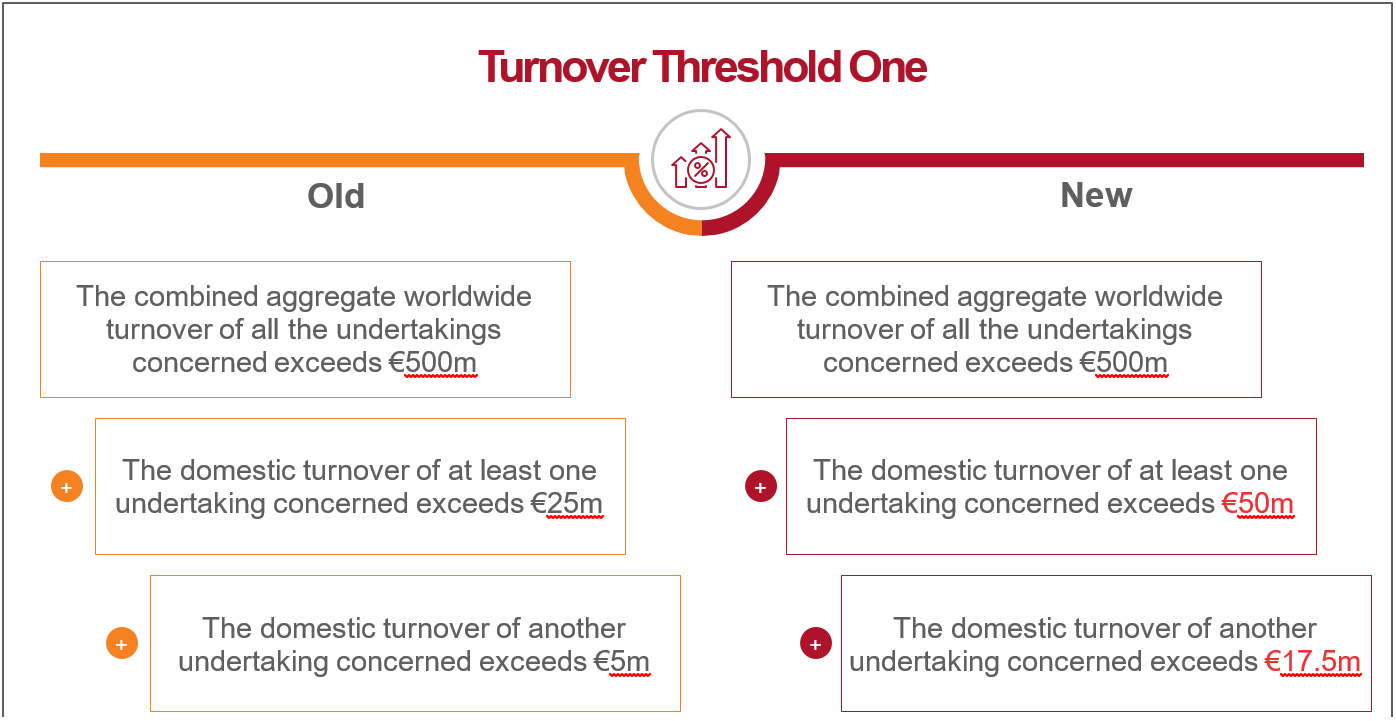 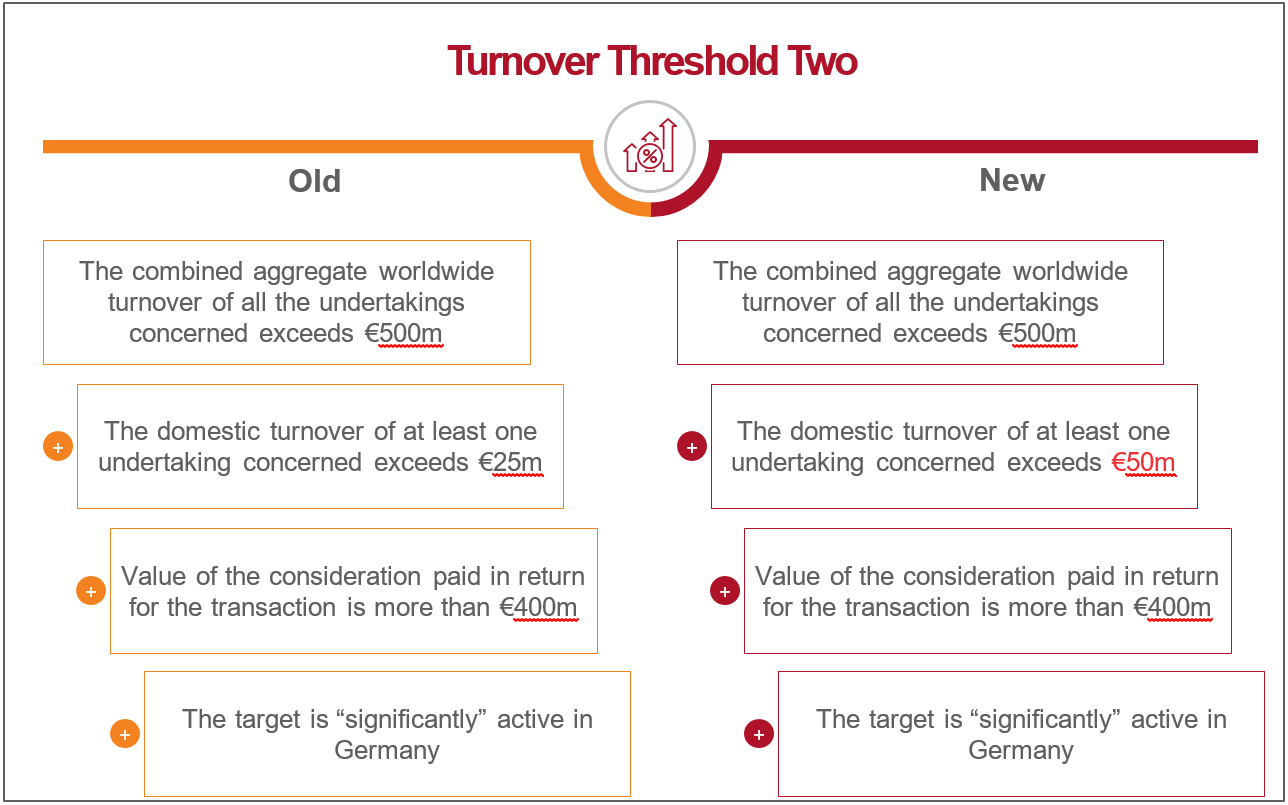 According to the German legislator, the increase of the turnover thresholds will decrease the number of merger control cases by significantly more than 20 percent.

In addition, it should no longer be possible to prohibit acquisitions if a minor market with a total sales volume of less than €20m in Germany (instead of the previous €15m) is affected. Further, the turnover multiplier in the publishing sector has been reduced to 4 (from 8) and there will be a merger control exemption for specific acquisitions in the hospital sector if certain conditions are met (until 2027).

Apart from the thresholds, the merger control process will be facilitated in other ways of practical significance: Companies can now use IFRS-based turnover figures (not only HGB-based figures) for the assessment of filing requirements. The obligation for companies to inform the FCO about the closing of a notified transaction falls away.

The amendment extends the period for an in-depth (Phase II) investigation from four to a total of five months from the date of the merger control filing. This allows a more flexible handling of the investigation, and prevents a development comparable to the European level, where the EU Commission’s requests for information have increased the risk of “stop-the-clock” scenarios significantly.

The so-called “Remondis-clause” aims at enabling the FCO to counteract market concentration tendencies also for transactions and parties falling short of the jurisdictional thresholds. This requires a prior sector inquiry of the relevant market(s). In this case, the FCO will be entitled to require an undertaking to notify all future acquisitions in the relevant market if

Also, the parties need to hold a share of at least 15% of the supply or demand of the products or services concerned in Germany. Finally, there need to be objective indications that competition in Germany is significantly restricted in case of further acquisitions. The FCO will probably be quick: Undertakings can expect that, immediately after the end of its sector inquiry, the FCO will impose such notification requirement (notably, current sector inquiries include the area of household waste disposal, smart TVs, online comparison platforms and charging infrastructure for electric vehicles).

The implementation of the ECN+ Directive (EU) 2019/1, which was – inter alia – the reason for the 10th amendment to the ARC, legally anchors the leniency program of the FCO in relation to cartels and implements further changes. In addition, the FCO will be entitled to request information and the release of documents not only from the undertakings concerned but also from individuals even if the information discloses facts able to bring about a prosecution of a criminal or an administrative offence. However, to preserve the nemo tenetur principle, this information and/or documents may only be used against that individual and her or his immediate family if the individual agrees.

Finally, the amendment will implement important procedural changes. Adequate and effective compliance measures conducted prior to an infringement to prevent and detect competition law infringements will – as in other jurisdictions, such as in UK or Italy – need to be evaluated, and taken into account, by the FCO when calculating the fine. Also, the amendment clarifies that, in addition to other assessment criteria, the turnover related to the breach of competition law must be considered concerning the calculation of the fine. This clarification which, so far, was only regulated in the FCO’s guidelines, aims to address the problem that fines imposed by the FCO were increased significantly by the German courts in the past due to their significant discretion as to the amount of the fine. Finally, the statute of limitation for cartel conduct is, de facto, extended when the antitrust proceeding is still pending before a court. Dr. Christian Burholt is a partner in the Firm's Berlin office. He has more than 14 years of experience representing German and international clients in antitrust, dominance, and merger control law matters. He has been recommended for antitrust and merger control law in regulated industries by Juve since 2010. Prior to joining Baker McKenzie in 2015, Christian was for seven years a member of the antitrust team of a major international law firm, and led for five years the antitrust practice group of Germany’s leading pharmaceutical and healthcare law boutique. Christian is admitted to the Berlin bar and a member of the German Association of Antitrust Lawyers and the Network Compliance. He regularly lectures and publishes on antitrust and merger control topics.