Browsing
Aaron Dauber is a Registered Foreign Lawyer and the Knowledge Lawyer for Baker McKenzie's non-contentious Financial Services Regulatory practice. He is responsible for monitoring and training on regulatory change, legal content projects and other knowledge initiatives to support the firm and our clients. Aaron's experience includes over 13 years' as an in-house counsel responsible for legal support to businesses across the Asia Pacific region including Japan and Australia with a global systemically important bank.

This edition of Bite-size Briefings explores the regulation of crypto (or digital) assets across a number of jurisdictions: Australia, Brazil, Hong Kong SAR, Singapore, the UK and the US. The Australian Prudential Regulation Authority has set out its initial risk management expectations for regulated entities that engage in activities associated with crypto-assets, and a policy roadmap for the period ahead in a letter to industry. The Australian Prudential Regulation Authority (APRA) has set out its initial risk management expectations for regulated entities that engage in activities associated with crypto-assets, and a policy roadmap for the period ahead in a letter to industry. We explore the APRA proposals in more detail below. The Securities and Futures Commission recently released the Consultation Conclusions on the Proposed Regulatory Regime for Depositaries of SFC-authorised Collective Investment Schemes and the Further Consultation on Proposed Amendments to Subsidiary Legislation and SFC Codes and Guidelines to Implement the Regulatory Regime for Depositaries of SFC-authorised Collective Investment Schemes. Whilst many of the proposals from the 2019 original consultation will be adopted without change, the SFC has refined its approach in several key areas to provide greater clarity to the industry. We summarise the key requirements that will be applicable to RA 13 licensees, the Consultation Conclusions and the new proposals for consultation in the Further Consultation. 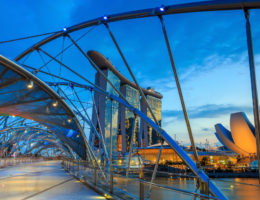 Following a series of consultations, the Monetary Authority of Singapore has implemented two new cross-border exemption frameworks, which came into effect on 9 October 2021.

The Securities and Futures Commission recently released its Consultation Conclusions on Proposed Enhancements to the Competency Framework for Intermediaries and Individual Practitioners. Changes to the existing Guidelines on Competence and Guidelines on Continuous Professional Training will take effect in January 2022. These changes impact the competence and ongoing training requirements for new and existing Responsible Officers and Licensed Representatives of Licensed Corporations, as well as Executive Officers and Relevant Individuals of Registered Institutions. A series of briefings that take a “bite-size” look at international trends in different jurisdictions, drawing on Baker McKenzie’s expert financial services practitioners. Singapore: MAS consults on expansion of investigation and other powers and alignment of regulations